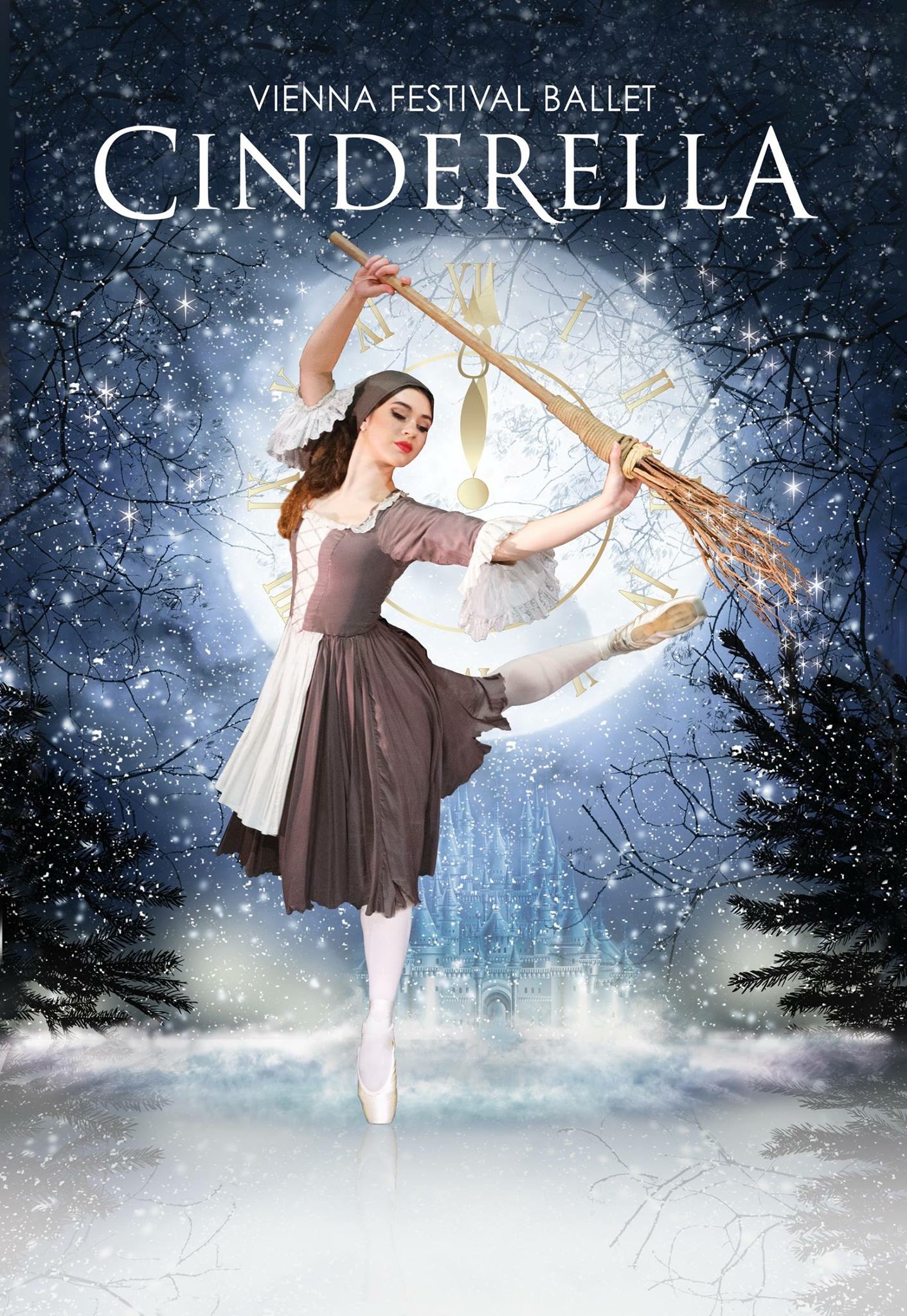 Mistreated and oppressed by her cruel stepmother and stepsisters Slarinda and Thisbe, Cinderella's life is full of hardship and suffering. One day the Prince and Dandini, the Prince's servant and friend, arrive at Cinderella's house with a special invitation to the ball. Sadly Cinderella is made to stay at home and clean. She goes to the forest to visit her mother's grave in tears, when suddenly her Fairy Godmother appears. With help form forest nymphs and fauns, the Fairy Godmother casts her spell and Cinderella is magically transformed ready to go to the ball.

She arrives at the ball in a beautiful dress, and attention is drawn to her, including that of the handsome Prince. He charms her and very soon, falling in love, they dance the night away, until the clock strikes midnight and the party comes to an end. Losing one shoe as she exits the ball, she returns to her downtrodden way of life.

Cinderella has managed to keep hold of her other pretty shoe and is musing on her wonderful adventure.

Her stepmother, Clarinda and Thisbe return home and taunt her with stories of the Prince. They are soon interrupted by the Prince and Dandini with the shoe. The sisters are desperate to try the shoe, to no avail. The men are about to leave when Dandini remembers the servant girl, she must also try the shoe. Of course it fits and Cinderella and the Prince are happily united.

If you want to see vitality, classic dance, wonderful story, romance and humour, then this is the way to spend your evening.

Cinderella is one of the most recognised stories around the world. The themes from the story appear in the folklore of many cultures. Sources disagree about how many versions of the tale exist, with numbers ranging from 340 to over 1500 if all of the picture book and musical interpretations are included. The best known versions were written by French author Charles Perrauly in 1697, based on a common fold tale earlier recored by Giambattista Basile as La Gatta Cenerentola in 1634, and the Brothers Grimm in the early 1800s. Vienna Festival Ballet's version of the story is loosely based on Gioachino Rossini's opera La Cenerentola. The opera was first performed in Rome's Teatro Valle on the 25 January 1817.

Rossini composed La Cenerentola when he was 25 years old, following the success of The Barber of Seville the year before. He completed Le Cenerentola in a period of three weeks. At the first performance, the opera was received with some hostility, but it soon became popular throughout Italy and beyond; it reached Lisbon in 1819, London in 1829 and New York in 1826.

In 1995 Peter Mallek, Artisitc Director, appointed Chris Nicolls, a renowned conductor and musical director for ballet, to rearrange and rewrite a score for the new ballet Cinderella using music from Rossni's operas. The music was then recorded especially for the company by the leading orchestra in Kosice, Slovakia, conducted by Nicolls himself. Audiences will recognise some of Rossini's most famous operas and string sontanas within the ballet, such as La Cenerentola, The Italian Girl in Algiers, Silken Ladder (overtures) and William Tell.

Sheila Styles, one of the company's expert choreographers, from the Sadler's Wells Royal Ballet was commissioned to create and choreograph teh new production of Cinderella.

The sets were fabulous and the lighting created the perfect atmosphere – the costumes brought each character to life.